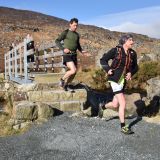 A short course race report.....and my first so apologies in advance.

Well done to all my fellow runners, Solo and Relay Teams.

Thank you so much to Liam, James and all the volunteers. For all the work done; from weeks beforehand up to and including the days afterwards and of course the whole day itself. Events like this don’t just happen.

(as for the match… let’s just say that I’m not going to be ‘Sought’ by any of the big clubs… or any of the small clubs either! I probably would have been better staying up to my waist in Lough Firrib!)

This is my second time running this race. The first time I raced it, it was special just because of the challenge it poses, but this year, with the sun shining and the temperature just perfect for running, it was one of those memorable days in the hills!

Being an orienteer, this race plays to my strengths with plenty of running over heather and bog, and macro and micro routechoice that can make big time differences over the full length of the course.

This year having trained consistently for several months beforehand, I was going into the race in better shape than in 2016 and so decided I would set out with the front runners on the solo race. Running up St. Kevins way I realised that I was feeling good today and found myself at the front by the saddle above Lough Ouler. I decided then I would keep the tempo high and hope the wheels didn’t come off later on.

I feel my route was better this time round. I felt I gained time (/didn’t lose time) by not dropping height once I got on to the south east spur of Tonelagee, though lost time to Adrian up to the spur as he took a lower more runnable gradual line up to the spur. Fastest route down and out of Lough Ouler has to be same way, dropping and climbing from the lowest point of the saddle, though the grassy exit out of lake looks inviting it requires more climb than needed. This year, I remembered to take the second shortcut on the road up to Turlough hill this probably shaved a minute off compared to last time round. Once out on the road to the reservoir, I saw Colm ahead, he went above the quarry near the reservoir and I got ahead by contouring below it, though it would have been nice to have had him to follow to lead me into the mystery that is Lough Firrib. Every time, I run to it, it always seems impossibly high up and I have come to realise that a good rule of thumb is to head for the local high point!, (just north of the large re-entrant which I always inevitably seem to hit.) I found a nice wee trod down to the three lakes and upon exiting them I remembered what Killian Brennan had told me two years earlier that the running was good (better!) on a higher line east of the river, I slowly dropped height and eventully hit the river near where the trees start.

Heading up to Arts Lough I could manage to keep some sort of a power walk. I was starting to feel the fatigue at this stage but still decided I had enough strength to try climbing above the crags on the east of Clohernagh. This proved to be faster than my 2016 effort which took less climb in by contouring but the terrain was tussocky and progress was slow. I cut off this higher path just as the slope eased and contoured just above the steep ground and then Kelly’s Lough became visible below. On the slope of the zig-zags, I took the left route option down to the carpark at Ballinafunshoge same as last time but this time was mindful not to drop too fast too soon and ultimately found a decent line through the stony ground to cross into the forest and onto the forest track for 100m to reach the road. Like 2016, I left the zig-zags at the first switch back.

Climbing up from the carpark to the saddle by Mullacor was a shuffle fest, two relay runners (Ben and Gael) breezed by me as if I was standing still and both would have had secured faster last leg splits had they not both made mistakes at different points, so I had them both breeze past me twice! On the devil’s steps, I had to stop, hands on knees and just breathe, recoup, the group of tourists sat snacking there, must have thought I was a wimp having witnessed no doubt the previous two runners storm through! I would have looked like death. Gladly, the climb came to an end and I could let the legs free wheel down the hill to the upper lough. The last two km – more torture, but I was aware of the time and pushed as best my body could to the end and tried to muster a smile as I finished. Immensely satisfied, one of my best ever race performances!

Thanks to Liam, James and all the other volunteers for organising a smoothly run event. Thanks to Mike for making copious amounts of water promptly available at the transition points.

Results are Available at the following links -