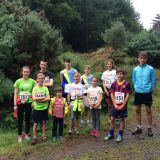 End of another League

Downshill, the last of the Trail League races; and what a night. The league table had been well examined and runners’ forms discussed. Of those with 3 races already completed there was only 10 points difference between the first and fifth place. Taking the best 2 results painted a slightly different picture. Derek in poll position with 3 points the next was 7 points. A mere 6 points between second and fifth places; Peter, Angus Rory and myself. Then there was Barry ‘Dark Horse’ Murray on 5 points. He had posted that he was in the West and might not make it. Despite the RD’s claims, I hadn’t set foot on Downshill since the race last year. I do recall there was a personalised guided tour of the route by the RD in 2016. That didn’t seem to be offered this year, or maybe I was dropped from the mailing list? So, on Wednesday morning I bundled the dogs (Ben & Max) into the car and zipped over to the Grove bar. They dragged me up to the top of the first climb and a bit down the other side. I also wanted to have another look at the ‘Race within the race’ - The Downshill Downhill challenge. Happy to have had a look at some of the route I decided on my Peregrine 5’s for the race; a bit worn, but good for the trails. But later in the day, the weather changed and with it my planned kit and runners. When I got home I grabbed a different top, pair of shorts and my mud-claws, forgetting my money!
I get to the pub in good time, register, have a few chats with fellow runners and head towards the start with Mikey, doing a bit of a warm-up on the way. I take a quick look at the muddy lane and am happy with my change of mind regarding my footwear. Back to the start and have a look around… No Barry, but wait- there’s Des, Michael, Turlough, Neilus, Bernard. Mr RD hadn’t mentioned these in his pre-race writings. I hadn’t time to re-calculate points. I knew it was going to be a tough race from the start. And sure enough, soon after, comes the 5,4,3…
The race starts at a fair enough pace, I tuck in nicely on Mikey’s heels as we take the first left. I want to keep in touch but my memories from last year’s race are coming back. “Don’t forget the second climb!” By the time I get to the turn for the fields I had just managed to get ahead of Mikey, with the front runners now gone well ahead. Guessing I’m about 12th, but the marshal calls out that we were 9 & 10 which gives me a bit of a lift. We move well across the fields and I open up a bit of a gap. It is short lived however as I realise I am being reined-in as we get back onto the forest trail. I take a bit of an unsecured loan from the energy bank and try to push a bit here. Eventually I get to the start of the climb. By the sharp left bend, I am nearly spent – payback for the early ‘loan’. Then I see 2 things; 1 The Military warning sign which I had run as far as that morning on my out and back reccie, so I have a bit of an idea of what remains, and it is a bit reassuring. But the second thing I see isn’t very comforting. As I glance behind I see a very determined and fast approaching Angus. If I can just hold out to the top of this climb…
Eventually, it comes and I’m on the famous Downshill Downhill, but the start is a bit too flat for my liking and it takes me a while to get going, not to mention the jelly-ish legs from the climb. In the distance, I can just about see Peter and some of the early starters. Having something to chase is a great boost and by the turn I start to get a good pace going. I think it is Barry Cronin that I manage to catch just before we leave the fire road. The steep muddy descent is great in my nobbly mud-claws and I sprint to the finish. 8th place no change to my overall league score and a quick look around to see who else has finished. A bit of a chat, then down to the pub, and as I walk in the door, I remember my keys! Back to the finish-line to collect them before eventually getting to the pub for a nice post-race chat and drink. The results are posted super quick and prizes awarded. I upload my run; I didn’t beat the RD’s 9-minute challenge, though it was never really on the cards! (9:53, 5 seconds better than last year) But a second-place finish in the Trail League is greatly welcomed.
Thanks to James and all the volunteers who gave up the evening, and more, to ensure we had another enjoyable race night