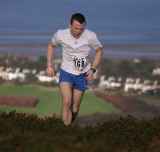 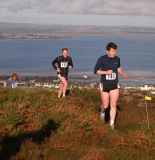 I felt very tempted to recycle last years Howth report so much was the same. The same good weather the same mud and same instructions from Doug Corrie &#8220; don&#8217;t stand on the fallen logs they are treacherous&#8221;. Well what was new; the hot showers courtesy of Howth GAA club were very welcome, now don&#8217;t go expecting hot showers on the side of Maulin. New also was the registration system where runners from previous years were recognised by date of birth and forms printed out for them to sign, that is if the printer did not decide to sit down.
As to the race, shortly after 11 o&#8217;clock the 114 runners did a lap of the playing pitches to spread them out before hitting the mud and the obstacle course in the woods. By the time they had reached the climb to the head they were well strung out in single file. Old hands to Howth knew that near the turn about the outward leg touches the incoming one and that the golden rule is not to cross a tape laid along the ground as this means you are off the course. However most manage to return without any mishap. Interestingly (or worryingly) there were four vets. in the first five, however Jonathan Doyle kept the honour of the &#8220;boys band generation&#8221; alive by being first home. There was a new first lady in Katharina Baldinger.
You can do the whole thing again on the 15th June, but then you must go around TWICE