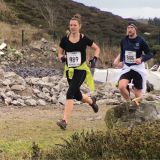 Glad to start the 2019 mountain season. Really looking forward to plenty of races this year. After decent winter of training with a short break around the new year I'm ready to get going!

I had never run the Howth race before, but knew it would be a good race to start with after my training break. Not too technical or long, but usually attracting a good mix of runners.

After a fun trip to Howth on an interesting public transport combination, I got the warmup in to see who was around. Plenty of familiar faces, and some new ones too. The route was to take the form of a number of loops around Howth summit:

The Aerials Loop- I am going to give this name to just the short piece from the start location, up the tarmac road to the aerials/ trig site and back to the tarmac road. I ended up doing this loop four times.

The Deer Park Loop- the classic loop in the overgrown and tight section of the hill, with the climb up the steps. Great fun. Formed the middle part of this race.

The Steep Climb Loop- The loop from the end of the Deer Park Loop, up the very steep and open climb to an obvious ridgeline/ viewpoint. From here, the trail continues back to the bottom of the hill with the aerials. You then re join the Aerials loop to the tarmac road and finish area via the hill top.

The race began straight up the tarmac road, onto the Aerials Loop. I headed out at a decent pace, keen to get going. Found myself next to the Newcastle runner Luke who put in a strong pace to the summit. We then headed down the short piece of single track back to the road, taking a right and then a sharp left at the start to head downhill towards the sea. I knew that the next section would be quick, but wasn't quite sure who was around me apart from Luke. Luke strided ahead at a good pace, dragging me along down towards the Deer Park Loop.

Crossing the valley close together, we headed into the Deer Park loop.Luke got a little confused about the direction we had to go around the loop, but this first wrong turn was quickly reset by a shout from the rest of us, including Colm Moran. I knew there were other people around, but didn't look around as I was right on the heels of Luke. The Deer Park loop is a combination of very tight, overgrown single track and then some wider open sections. It includes numerous steep but short climbs and descents. Heading down the major descent, Colm Moran headed past, always a strong descender.
The descent continued with various well marked turns in the bushes, before we eventually were faced with a climb. I strided out ahead up the steps, eager to create some kind of gap before the next step. The climb was good and steep, with some technical bits keeping it interesting. Flattening out, we ended up back at the beginning of the Deer Park loop, well directed by marshalls. Luke had edged ahead again heading up the steep climb back up to the ridge and viewpoint.

I knew I had to move on the climb, so I put the pressure on. I edged ahead as we came over the top, but along the ridge Luke moved up again.

It was from this point on that the real confusion began. I'll try to explain it as I saw it. Skirting around the bottom of the hill with the Aerial Loop, Luke missed a left turn to head back up the hill. A shout from me put him back on track, but it probably cost him 30- 40 seconds. This meant I headed back up to the aerials on my own. Coming off the aerials back onto the road, I didn't know what to do next. I knew we had more to do, so headed back along the road up towards the aerials, with Luke coming along too. Around here we met Colm, who made it clear we had in fact done the wrong loop twice, meaning we instead had to do the whole loop with the steep climb instead. We followed him left at the start/ finish, heading down and back to the bottom of the steep climb. By this stage, we had caught the back of the main group, so the climb and ridge after was busy, introducing the next question of ethics regarding whether or not to shout at people in front.

I found myself out ahead by this stage, and completed the whole steep climb loop into the aerials loop again, before heading a little confused through the finish line. Colm and Luke were together a little behind. Apart from the extra loop of then Aerial loop, I had run the correct route. Luke had added a bit more on top of that too with the wrong turns.

Despite these issues, it had been a fun race. I hope this report somewhat clears up what happened as I saw it. The marking was good, but I think confusion arose around the loop combination.

Thanks to all the volunteers involved. Nice to see such a strong field too, meaning plenty of battles coming in the future. Another great race by Aoife Coffey, showing the junior talent that is in IMRA. Hopefully the great support that has been given to the juniors can continue, as has been recently added to by great role models like Sarah McCormack.

Looking forward to some more races soon, first up an attempt at Assistant RD at Trooperstown.