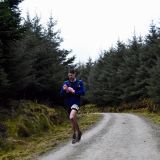 Yet another Super event, well organised and planned. Last minute changes appeared to be seamlessly incorporated. Well done to Dermot and the crew of volunteers who worked hard, not only on the long day but before and afterwards.
There is something very special about these events. The last time I ran the Dublin Marathon, I thought “Never again” and it wasn’t really all that bad in hindsight. I’ve had more challenging experiences in IMRA races and can’t wait to get another shot at them! Can someone please explain?

This year I decided to help out so Dermot assigned me to help with the parking. So got to Johnny Foxes around 715 and chatted with Graham Bushe for a while before the first runners started to arrive. Graham usually flying by me in the races so nice to have a chance to talk - only down side is that with Graham running the solo again this year so I'll have to wait till I'm 60 for any hope of a category win in that race! Anyway I took the easy and social job of directing traffic in so great to meet up with some familiar faces - John Joe Barry, Ray Lawlor, Joe Berney and many more. Leaving Alastair and Graham, quick grab of gear and down to reg before the start.

Perfect running conditions but forecast for light rain so was hoping would not be as warm as last year. Given the weather this year to date anything was possible. Everybody very relaxed at the start so was fluting around at the back of the field before I realized the race had actually started. Off down towards the bridge with John Joe Barry and could see the lead runners already flying up the hill. Eased of the pedal (sounds good but a relative term!) and settled down for the drag up to PWS. First year I ran this all the way but old age and more "sense" permits a walk on the steeper bits. I'm crap at the technical bits but the sun was shining as headed down towards Curtlestown Wood. Paul Daly flew past me as did a few others. I'm crap at downhills as well! Met up with a Polish runner over near Lacken wood and nearly missed the turn down towards the Glencree river as talking too much. Path down to river and along not as bad as feared so on into CP at Crone. Packed away the gloves and hat as warm now. On up towards Powerscourt nice and steady - met the missing dog running in opposite direction but didn't know it at the time. GPS watch lost signal at this point but I never pay much attention to it anyway - just looks good to be checking it. Down and up the Dargle and onto Djouce. Lots of very polite hikers on the shoulder of Djouce - one even called me a "Gentleman runner" because I was so clean - wouldn't have thought so 2 hours later! Goal was to get off the boardwalk before the main group of trail runners came up but met some of the early starters and lead runners still. Nearly did my ankle in getting out of the way - mental note don't be so nice! Anyway down towards Balinastoe - meet and greet section. Great to see Brian Byrne, Stephen Brennan, JuJu, Mark and many others on way up and plenty of encouragement both ways. Much cooler down in the woods but a few lads bare chested (don't have the body for that crack anymore!). So 3 hours to the turn - thought I was doing better but par for the course on outbound leg though I don't do negative splits!

Got my drop bag, topped up water bottles with some flat coke and ate a few nuts on the way back up. Quick wave to Vivian at turn then on up boardwalk. Heavens opened near top of boardwalk so on with my ultra bright orange jacket, hat and gloves. Feeling good as head across shoulder of Djouce bracing for slippery grassy section but Djouce and I have a long history and in a blink I face planted. So what's new on Djouce except this time the right knee is covered in blood. Now can't pour coke on a wound but feels okay so carry on but much more cautious. Take to the heather over the rock section and a runner behind me thought that was I was been over cautious until he slipped on them. On down the grassy sections with a few slipe/slides past the group of scouts - need new trail runners. Then over the stile and come across Sarah who has fallen badly. French girl (name?) has called Mountain Rescue and I talk to them to give location details. Other runners arrive and get Sarah wrapped in couple of foils. Then some hikers arrive and stay with her as we are all getting very cold rapidly. I know the scout group are not far behind and turned out they had 2 doctors with them. We get moving again but Mountain Rescue keep calling my number but my phone screen is wet now and can't answer despite numerous attempts. We're all ultra careful now. Meet first MR guy in jeep at Ride Rock - that was such a fast response. He heads up trail so I keep going down to Crone. While talking to lads in Crone my nephew and 2 nieces turn up heading for a walk - pure chance. Option of a lift is tempting at this point as cut off close but my nephew withdraws the offer - go finish the race!

Sun is shining now so trundle off down along the river and up past Paolo I think who was in great form - singing along. On up to Curtlestown and top up
water - thanks to these guys for staying out so long. Head up PWS - did I say I suck at uphills as well. Over PWS and catch a few lads on down/up to finish just over the 7 hours (thought the finish was at GAA so that cost me the race!) but in good form and in one piece more or less. Becky offered to clean up my knee so I don't get in trouble when I got home. Ran back to the car to a few shouts of the race was over but didn't want to be late for dinner. But my nephew and nieces were sitting in Johnny Foxes and pulled me in for a pint (I'm making a habit of drinking during races these days!).

Thanks Dermot for all your hard work over the years. Great old race regardless of how fast or slow you run.